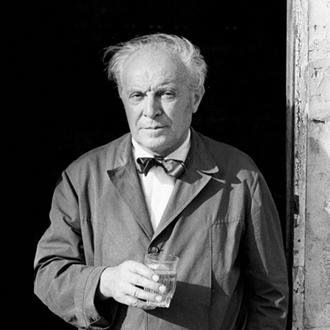 Gio Ponti was born in Milan the year 1891, obtaining his degree in architecture from the "Politecnico" University of Milan in 1920 and he started working in the architectural design office headed by Mino Fiocchi ed Emilio Lancia. Since the beginning of his career, Gio Ponti succeeded in melting paintings and architecture. In addition, he has worked in the graphics and scenic design fields. He has collaborated with many artists such as Massimo Campigli, Piero Fornasetti and Pietro Chiesa.

From 1923 to 1930 Gio Ponti was Richard-Ginori's artistic director where he has designed many series of china collections. In 1926 he founded the magazine "Domus" in partnership with the editor Gianni Mazzocchi and thanks to this magazine, that he lead until his death in 1979, he was able to cultivate relationships with the world’s most important architects and designers such as Charles Eames and Tapio Wirkkala.

In 1931 Gio Ponti was called to artistically lead the Luigi Fontana company and in 1932 along with Pietro Chiesa he founded FontanaArte for which they design furniture, tables, lamps and glass windows. While among the promoters of the Golden Compass Award (Premio Compasso d'Oro) in 1954, he participates in the creation of the ADI (1956) and in that same year, he is awarded with the Golden Compass. Gio Ponti collaborated on the "Biennale di Monza" exhibit and since its first edition he also became a collaborator on the "Triennale di Milano" exhibit for which he, on more than one occasion, planned its agenda. Ponti’s design encompasses all fields; architecture, design, advertising, and teaching. In the field of architecture he has produced numerous public and private buildings such as The "Case tipiche" located in Via De Togni, Milan; "The tower house" (La casa torre) located in Corso Venezia, Milan; The RAI and Ferrania buildings; The tower Littoria located inside the Parco Sempione (Sempione Park), Milan; The Pirelli skyscraper in Milan; The Mathematic Institute in Rome; The Cathedral of Taranto; Villa Planchart in Caracas; The Faculty of Nuclear Physics inside the San Paolo University in Brazil and the MOMA in Denver, Colorado. In the field of furnishing Gio Ponti created the interiors for the transatlantic liners Giulio Cesare and Andrea Doria. In the field of design his popular furniture designs include lamps and all the objects designed for FontanaArte and among these the Ultraleggera chair and the furniture designed for Cassina; the silverwear for Christofle and the china for Richard-Ginori. From 1936 to 1961 he taught at the "Politecnico" University of Milan. His achievements and in particular his educational path, with lectures all over the world, helped him to get awards such as the honorary degree "Laurea ad Honoris Causa" from Royal College of Arts of London. Gio Ponti died in 1979.

Among his pieces designed for FontanaArte, and still produced today, are the lamps 0024, Bilia, Pirellina, Pirellone and the Tavolino 1932 table.
News
Sale offers
Outlet
Subscribe to Newsletter
+420 244 402 459
hagos@hagos.cz
© 2023 HAGOS,
DESIGNED BY
GDPR
Join us
Subscribe to our Newsletter