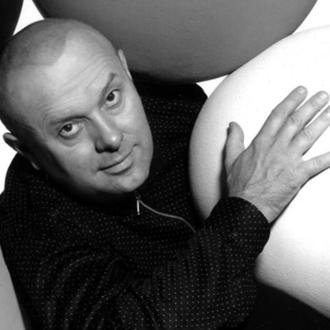 Denis Santachiara is an original and extravagant international designer; he started displaying his art and design pieces at various venues such as the Biennale exhibit of Venice in 1980; the exhibit "Tutte le arti tendono alla Performances" at the "Palazzo dei diamanti" in Ferrara in 1982; the exhibit "Documenta 8' Kassel" at the Triennale of Milan in 1982, 1984, 1986, 1996, 2001 and 2004 and the "Quadriennale" exhibit of Rome in 1998.

Original exhibits:
- Denis Santachiara organized original exhibits at: The Museum of the Arts of Lyon, France and the Vitra Museum of Weil-am-Rhein in Germany;
- "La Neomerce, il design dell'invenzione e dell'estasi artificiale" in 1984 at the Triennale of Milan
- The Centre Georges Pompidou in Paris
- The international exhibit "Performativo, tecnopoetico e ironico" and "I segni dell’Habitat" at the Grand Palais of Paris in 1987
- The Berlaghe Museum in Amsterdam in 1988
- Tokyo in 1989
- The exhibit "the New Persona" by Germano Celant in 1997 and 2000 in Florence
- The exhibit "Stanze e Segreti" at the "Rotonda della Besana" by Achille Bonito Oliva in Milan
- The exhibit "Water Design" in 2003 and "Open Living 2004" as part of the event Design Week in Tokyo.

Permanent collections in museums such as:
- The MOMA in NewYork; The Musée des Arts Décoratifs of the Louvre
- The National Museum of Modern Art of Tokyo
- The Musée of Lyon
- The Museum of Frankfurt
- The Vitra Museum of Weil-am-Rhein
- The Philadelphia Museum
- Collection de Design of the Centre Pompidou
- The Museum of the Design, Triennale of Milan.

Exterior and interior design projects such as:
- "Chartreuse d'Avignon" on behalf of the Ministery of French Culture
- Furnitures for the main square of the city of Toyama in Japan
- the Art Hotel in Dresda
- he won the international contest ZIP for the city of Saarbrucken in Germany
- the Generali Bank
- promotional centre for the region Emilia Romagna in Shangai
- the Biennale exhibit of architecture in Beijing.

Among the awards Dennis Santachiara has received and his published works are:
- 2002, the publishing house "Abitare Segesta" has printed a book that is part of the collection Prontuario on his activity, Forwarded by Virginio Briatore.

He received the "Compasso d'Oro" (Golden Compass) award in 1986, and in 1999 he received the Good Design Award from the Chicago Athenaeum Museum of Architecture and Design; in April 2000 he was awarded in two different sections at the Design World. His teaching activity includes courses and seminars in numerous universities and institutes such as: ISIA of Florence; Rietveld School of Rotterdam; the Royal College of London; Les Ateliers of Paris; "Escuela de diseno" of Barcelona; The seminary at the University of Tokyo; The University of Jerusalem; The Academy of the Arts in Saint Peterburgh; The "Accademia di Brera"; The "Politecnico" University of Milan. He has taught courses at the Master at the Domus Academy; the European Institute of Design; the FMI in Washington, Cambridge University, Boston; "Universitad Mayor" in Santiago del Chile; University of Venice (IUAV); Creative Academy in Milan; "Universitad Veritas" in Costa Rica. Recent initiatives: Monastery Santachiara. His current activities consist of "Tecnology Connection" among the producers of advanced technologies and producers in the field of design, entertainment, and production processes.

For FontanaArte he has designed the lamps Aurea and Luminair.