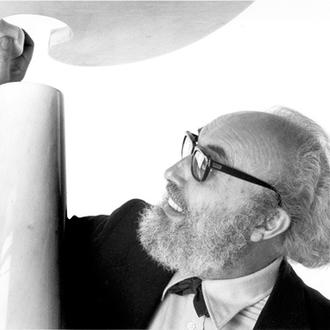 Angelo Mangiarotti was born in Milan in 1921 and received his architecture degree in 1948 from the "Politecnico" University in the same city. From 1953 to 1954 he worked professionally in the United States and in that time entered a contest Chicago's Loop. During these years Angelo Mangiarotti's time in the United States, he meets Frank Lloyd Wright, Walter Gropius, Mies van der Rohe and Konrad Wachsmann.

Upon returning to Italy from the United States in 1955, Angelo Mangiarotti opened his own studio in Milan in partnership with Bruno Morassutti with whom he worked until 1960.

In 1989 he opened the "Mangiarotti & Associates Office" in Tokyo.

From 1986 to 1992 he worked as art director for the "Colle Cristallerie", a crystal factory.

During his professional career Angelo Mangiarotti has been published in books, specialty magazines and the daily newspapers. Angelo Mangiarotti also presides over an advanced educational program in a number of Italian and international universities. Mangiarotti's design career, was in the book titled "In nome dell'architettura", published in 1987, aims to highlight an object’s intrinsic qualities. In other words, the architectural language expresses the material’s characteristics and the execution techniques and to search inside them and through that describe a new relationship between the human being and his environment. Among his works that demonstrate his architectural language are: The industrial building in Alzate Brianza (1962); The office and services buildings in Majano del Friuli (1978); The state train stations of Certosa and Rogoredo in Milan (1982-1988); The "Passante Ferroviario" train stations of "Reppublica" and "Porta Venezia" in Milan (1983-1996); The offices for the company "Internazionale Marmi e Macchine" in Carrara (1992-1993); The industrial building in Giussano (1993).

During his designing years Angelo Mangiarotti devoted his time to the research of plastic materials. With this mind-set, vases and tables were studied; created with stony materials in the 1970s and even more emblematic were the studies for the objects made of alabaster (1981-1982) and for the sculptures in alabaster "Saggi" (1986). All these works were a starting point for more recent experimentation in the field of cut stony materials with numerical control machines ("Cono-cielo", 1989; "Catenaria" 1993) and in the field of chromatic plastic investigated with the sculptures and the multi-layered wooden panels (1988-1993). His developing career has been marked with numerous awards in both fields of design and building such as: Premio Domus Formica in 1956; Premio In/Arch for the region Lombardia in 1962; "I Premio Nazionale del Golfo di La Spezia per l'Industrial Design" in 1963; "Premio AIP (Associazione Italiana Prefabbricatori) ad opere di edilizia industrializzata" in 1972; Prix Européen de la Construction Métallique in 1979; The medal and the honorary degree received at the "III Biennale Mondiale di architettura" (3rd Worldwide architecture Biennale exhibit) in 1986 in Sofia; First prize at the contest "Concorso Targa Alcan" for applying aluminum to architecture in 1989; Special notice at the "Premio Nazionale IN/ARCH 1989" for a building element industrially produced; "Premio Design Plus" for the collection "Ergonomica" for the table in 1991.

Also, in 1994 he received an award as part of the event "Marble Architectural Awards 1994" for designing with stony materials, and a "Compasso d'Oro" (Golden Compass). In 1998 he was honored with the Honoris Causa
News
Sale offers
Outlet
Subscribe to Newsletter
+420 244 402 459
hagos@hagos.cz
© 2023 HAGOS,
DESIGNED BY
GDPR
Join us
Subscribe to our Newsletter